As a CDMO expert in lentiviral vector design and manufacturing since 2005, we produce very pure and highly concentrated integrative lentiviral (iLVs) and non-integrative LentiFlash® particles (biological RNA delivery technology). We will assist you from discovery to clinical studies and adapt the production scale and the vector quality according to your needs.

With over 16 years of know-how in lentiviral technology and a robust and proprietary bioproduction process, Flash Therapeutics has produced more than 8000 lentiviral vector batches for scientists and clinicians all over the world.

Flash Therapeutics can support you for the design of your project, then we take care of all steps to provide integrative lentiviral particules or LentiFlash® particles for RNA transfer.

2G or 3G lentiviral vector depending on your needs

If needed, we can support you with the optimization of your expression construct as well.

A third self-inactivating transfer plasmid (deletion in the 3' LTR) contains the transgene-s of interest under the control of the chosen promoter.

Transfer and VSV-G envelope plasmids remain the same as for 2G production.

Then we utilizes split-genes to provide the viral packaging elements in order to reduce the risk of RCL (Replication Competent lentivirus) : A first plasmid provides a nucleic acid encoding viral Gag, Pol and a second plasmid carries the Rev sequence (used only for integrative vector production). We further reduced the risk of RCL by removing the Tat gene from the Rev plasmid.

These improvements significantly increase the safety profile of our lentiviral vectors, which can be used in category II laboratories in most EU and other countries. We can produce 3G vectors even at a discovery level project, to facilitate future clinical translation.

Even if manufacturing processes differ for the different vectors used in gene therapy, a common requirement is an efficient purification of the product to remove any contaminating viral components that can have a detrimental effect on target cells.

Investment in manufacturing started early in our development, as we consider that providing high quality products is a success factor for the development of cell and gene therapy but also at the discovery level, to ensure robustness of data obtained and their possible clinical translation.

Our lentiviral manufacturing platform provides the highest purity on the market.

Flash Therapeutics also developed a reliable and discriminating titration method based on the actual content of effective particles, quantified by qPCR in integrated Virus Genome units (IG). This ensures that we do not include in our titles the total number of particles including damaged or empty particles and guarantees robust and reproducible performances of vector batches.
We can also give a PP/IG ratio (on demand) which provides a good measure of the quality of the vector produced. This is part of our requirements for transparency and quality.

GMP manufacturing and purification of selected and optimized candidates.

Different products for each stage of your project

Flash Therapeutics offers two qualities of vector depending on your applications:

Start is dedicated to screen and select the best vector candidates.

Premium is dedicated to in vitro or ex vivo approaches, in vivo gene therapy, transgenesis or direct tissue injection experiments. 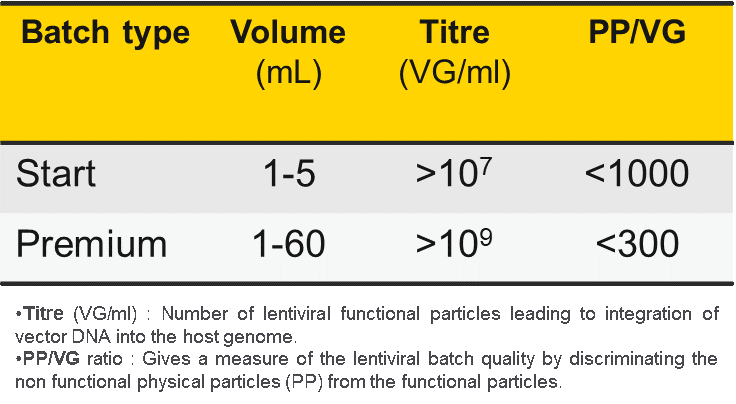